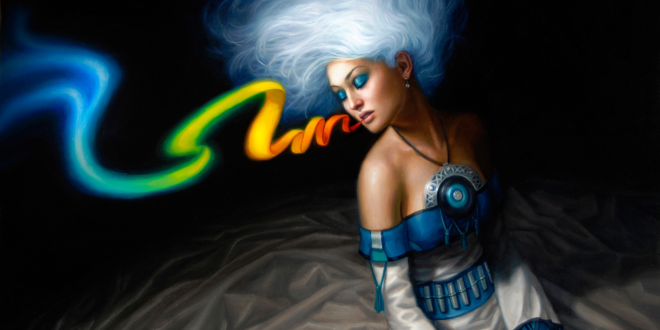 Warbreaker, a stand-alone novel by Brandon Sanderson, takes place within Sanderson’s universe known as the Cosmere on a planet called Nalthis. The story follows the lives of two sisters who are princesses of a country called Idris. And Idris is on the brink of war with a country that has a very different lifestyle, Hallandren. The only thing that can be done to try to prevent war is upholding an arranged marriage between one of the princesses and Hallandren’s God King.

In Warbreaker, you get Sanderson’s classic writing style. It is a character-driven book with a strong plot. He skillfully creates flawed characters that are both relatable and extraordinary and he weaves in a well-developed magic system that has structured powers and limits.  That makes it more intriguing to the reader because the magic system is not overpowered.

A bit more light-hearted than Sanderson’s other books, Warbreaker has a few witty, amusing characters that add a jovial tone. For the main characters, self-discovery is a common theme. Many of the main characters struggle with who they are and who they want to be. Some more stubborn than others, our main POV characters battle not only their environments but their own selves. I’m reminded of a quote from Ralph Ellison… “When I discover who I am, I’ll be free.” As the characters continue along their individual journeys, they each find a sense of inner peace and self-confidence.

The climax of this book is interesting and filled with twists and turns yet leaves something to be desired. Comparing Warbreaker’s ending to some of Sanderson’s other books, this one fell on the lower end. It felt like the climactic build-up towards the end of the book happened abruptly. And once the build-up started, it immediately slowed for the next 50 pages before taking off once again for the remaining 50 pages.

If you’ve read other Sanderson books, you feel a genuine excitement when you learn about another world in his Cosmere universe. Especially when you can tie certain characters between his book series, you experience a sudden thrill. Warbreaker is a great example of this where it ties in beautifully with The Stormlight Archive. With Warbreaker currently as a stand-alone novel, I wish Sanderson had gone into more detail about certain aspects of the Nalthis’s history and magic system because, for now, this book is all we get for this unique part of the Cosmere.

If you’re trying to get into epic fantasy or if you want to see if Sanderson’s writing style works for you, Warbreaker is a fantastic starting point. Get a taste of what Sanderson has to offer with this stand-alone novel.